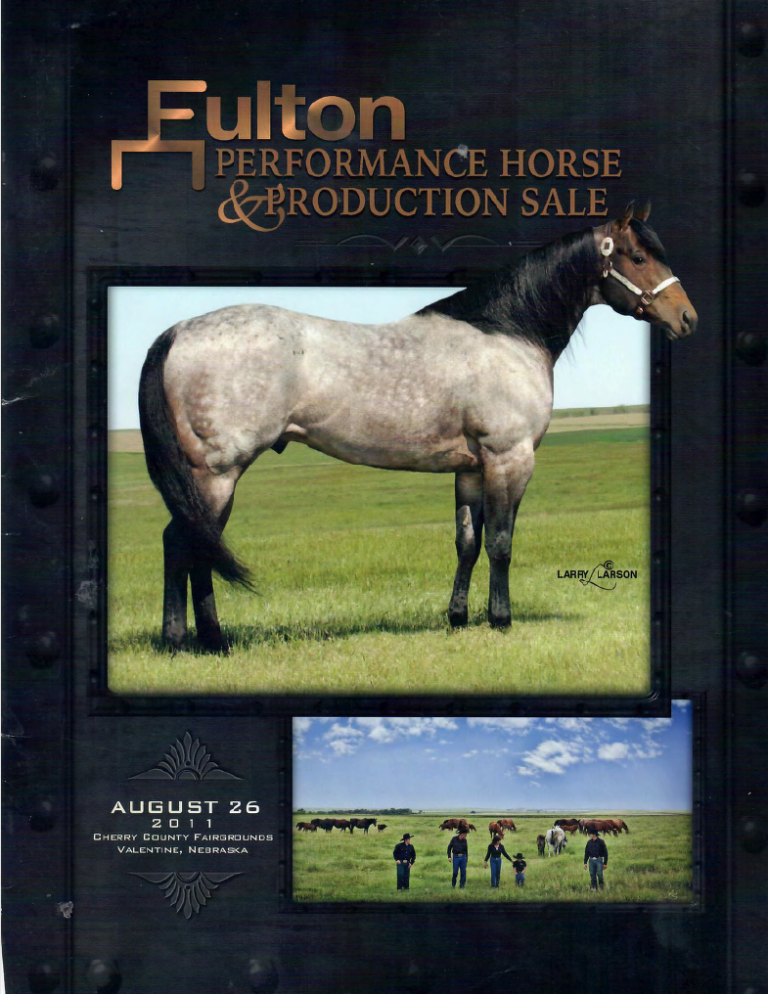 Nestled in the rolling hills hugging the Nebraska and South Dakota border, the Fulton Ranch is the perfect combination of powerful grass and the soil that grows young horses into talented arena performers. Located just north of Valentine, NE, Brian and Lisa Fulton and their boys have developed a breeding program now producing national and international leaders in a wide range of performance arenas.

The home of A Streak Of Fling, the AAA son of Streakin Six (speed index 104), and CS Flashlight (speed index 106), an own son of Royal Quick Dash (speed index 101), the Fulton Ranch presented another phenomenal sale at the Cherry County Fairgrounds in Valentine on August 26th, 2011. The ranch offering was again supplemented with outstanding consignments from guest consignors from across the nation. Record bidding throughout the sale was a testament to the Fultons’ highly-respected reputation in the horse industry.

Haras International from Brazil made a strong presence at the 2011 sale with their record bid of $46,000 for Streakin Silver Dash. The 2009 bay roan daughter of A Streak Of Fling, consigned by Fulton’s, is out of the mare Silver Creek Dash by Leading Barrel Horse Sire, Dash Ta Fame (speed index 113). Campaigned by Bo Hill to barrel racing earnings of $53,200, Silver Creek Dash is now owned by the ZD Ranch in Brazil and was the 2006 Barrel Futurities Of America (BFA) Reserve World Champion.

Drawing considerable interest was a 3-year-old son of A Streak Of Fling consigned by Jones Driftwood Horses from Genoa, NE. The dun roan stallion JD Streakin Drifter is out of Clair Jones’ proven producer Chalamar Drifter by Colonel Charge. Already a sire with seven foals on the ground in 2011, he left the ring on a final bid of $45,000 from David and Jody Markey, Albany, IN, who made multiple purchases throughout the sale.

Two of the high-selling Fulton Ranch consignments shared a trailer ride south into Oklahoma – destination was the Jud Little Ranch in Ardmore. Again sired by A Streak Of Fling, Streakin Tiny Doc is out of Winnsboro, the AA daughter of Merridoc (speed index 102). The 2009 chestnut mare brought a bid of $26,000 and is a full-sister to a past sale high seller, BF Streakin Merridoc, now standing at the Hagan Ranch in Canada. Jud Little also had the bid on A Streak Of Fortune, another daughter of A Streak Of Fling. Paid in full to the 2011 BFA in Oklahoma City and already running competitive times in exhibitions, she is out of the mare Pure Country Cash by Takin On The Cash (speed index 109) with Bully Bullion (speed index 104) on the bottom side. Leaving the ring at $21,000, the 2007 bay roan mare was consigned by the DeWeese Family Rev. Trust from Claremore, OK.